Let’s enjoy the clean environment – now, and in the future

The deteriorated state of the Baltic sea has been a hot topic over the last decades, especially in Northern Europe, where Allegro’s roots are also. Same is obviously true to other parts of the world, as well. Changes for the better have been made in the matter. In 2013, EU set limits for the use of phosphates in laundry detergents. Phosphate is a substance that causes the eutrophication of waters and worsens the condition of surface waters in areas, where there are no municipal water treatment plants to purify the water from phosphates. Water containing phosphates could then reach bodies of water and cause eutrophication. Limiting the use of phosphates was a step in the right direction, although there is much more still to be done.

Zeolite causes harm to us humans but also to washing machines

Zeolite is a mineral that is insoluble in water. It is therefore a quite nasty substance in laundry. See, due to its physical qualities, it tends to get stuck in between the fibers of a cloth. And it doesn’t really come off. This is one of the reasons why people get skin reactions – zeolite particles keep on scrubbing against our skin and most people get an allergic reactions from this.

It doesn’t cause the same kind of direct harm to the environment as phosphate. Instead, it is notorious for its harmful effects on health for clogging and breaking washing machines. The clogged washing machines take their toll on nature, as their shortened life-spans cause consumers to have to buy new ones every few years. Furthermore, zeolite gets stuck in the heating element and therefore it poses a serious risk of your washing machine catching fire!

Zeolite not only takes its toll on washing machines, but on municipal water cleaning facilities as well. Due to the aforementioned reasons, it’s worth preferring environmentally friendly, zeolite-free laundry detergents Allegro Plus and Allegro Eko ( Eko is also phasphate free ) .

You might wonder: how should I go about choosing an ecological laundry detergent? One way is to choose a detergent equipped with the Nordic Swan, which is the official sustainability ecolabel by the Nordic countries. It might not be the most cost-effective choice, though. The Nordic Swan-label is quite expensive for the manufacturer to obtain, and that will reflect in the product’s price. That’s why some manufacturers haven’t applied for the label – even though their products do qualify for it, they don’t want the consumer to have to pay for it. That’s why the cost-effective choice is to carefully acquaint yourself with the denominations of harmful chemicals such as perfumes, synthetic dyes, optical brighteners and preservatives. When equipped with this knowledge, you can choose a product that doesn’t contain them.

Why concentrate is a good choice?

Another thing worth remembering is to prefer concentrates. A concentrate in this case denotes a laundry detergent that is either a powder or liquid that contains a smaller dose of more efficient dirt-removing substances. Concentrates can be considered as the eco-friendly choice, since they use substances that burden the wastewater less, and when dosed correctly, the amount of chemicals that end up in nature is significantly lower. When using concentrates, it’s important to remember to follow the dosing guides, so the benefits of using a concentrate are revealed. Laundry detergents are often dosed excessively, just in case. Concentrates are more plentiful – you will spare nature from additional packaging-waste and the emissions from the transport of the detergents, while also sparing your wallet. When buying laundry detergents, it’s important to remember that liquid detergents include added water. Preservatives are also often found in liquid form detergents. Washing powders are denser than their liquid counterparts, by favoring powders you won’t have to spend your money on water.

The denominations of harmful substances

When picking environmentally friendly detergents, you should avoid the following substances:

Choose your environmentally friendly laundry detergents that are free of zeolites, coloring substances, chemical perfumes, preservatives, or optical brighteners Like Allegro Plus and Allegro Eko.

Use a detergent that doesn’t contain bleach, or a product where the bleach (wash power booster) comes separately. In this manner, you can use your laundry detergent with a clear conscience and minimize the impact it has on nature. When you can ration the bleach for your white or your stained colored laundry yourself, you won’t needlessly discolor your dark laundry.

Now you know how you, by choosing the right laundry detergent, can protect nature and rejoice it with a clear conscience, together with your family for the coming decades.

Our story started in 1959, when Aimo A.Virtanen established his first paint factory in Parainen, Finland. Since the paints intended to outdoor use were mainly 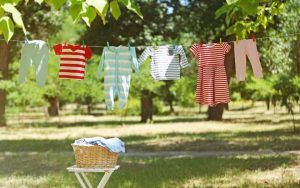 So let’s look at some of the main reasons, why Allegro gains thousands of new happy users every year in Europe and in Asia.

Let’s enjoy the clean environment – now, and in the future

The deteriorated state of the Baltic sea has been a hot topic over the last decades, especially in Northern Europe, where Allegro’s roots are also.

Back to Blog front page

Simply place your order via this web shop!